Jim has run over 100 marathons and about 80 half marathons to date. He is working on completing 100 half marathons by April 2020. Jim is also the race director of the Kakabeka Falls Legion Half Marathon and 8 KM in Thunder Bay, Ontario, Canada. He is the most famous runner you have never heard about… Until now!

Jim spent 8 years in the Canadian Armed Forces Reserves leaving in 1986. While in the army, Jim ran a lot, but usually not voluntarily and certainly not for fun. While doing a few forced marches, he never did a full marathon distance, and, frankly, never had the desire to do so.

After leaving the Reserves, Jim went to work as a Correctional Officer. He remained there for 6 years until taking a position with his Union as a Litigation Officer. He found himself inactive and putting on a few pounds. In 2001, he decided to change that.

Jim was determined to lead a healthier lifestyle

He started eating better and became more active. He took up running again. This time for fun and health. He started running in smaller races and eventually worked his way up to the Fire Fighter’s Ten Mile Road Race in Thunder Bay.

After that race, he started to talk about running a marathon. It had been on his bucket list for some time.

Jim was going to run the 2004 Honolulu Marathon


To encourage his family to join him, he picked the 2004 Honolulu Marathon as his goal race. Who doesn’t love a trip to Hawaii? Jim started his training.

He paid for his entire family, including his 2 teenage daughters, to go to Hawaii to cheer him on.

On race day, he woke up at 3:00 am to get ready and head down to the start line. His family, not wanting to get up that early, were to join him later as he crossed the finish line.

Jim ran that marathon in 5 hours and 45 minutes. But, when he searched the spectators after crossing the finish line, there was no family to greet him.

Jim was tired, sore and thirsty after he finished, and could not find his family

Jim had taken some water at the water station on the course, but there was no water at the finish line. All the tents there seemed to be designated to specific groups or were selling things. Jim was parched, starving and sore after running his marathon. He had pushed his body almost to the breaking point. Even his eyelashes seemed sore.

Jim was desperate for water

Wandering around, he managed to find a tent that welcomed him in. It was a tent for an Asian contingency. They handed him some water. Jim took a big gulp from the cup and promptly spit it back. He nearly threw up. It was barley water. Even though Jim was both thirsty and hungry, he could not drink this horrible tasting brew.

He continued to stagger around looking for his family. His pocket had only 2 one dollar bills inside. He found an ABC store stand that was selling hot dogs and Gatorade for $1.00 each. Perfect, he thought. But his oasis quickly vanished when he was told that tax was extra. He had to choose between hunger and thirst. He chose the Gatorade.

Jim eventually made his way back to the condo they were staying at. But, when he got there, he realized that he did not have a key. There seemed to be no one inside. So, after filling his empty Gatorade bottle with lukewarm water from the pool deck shower, Jim found a deck chair beside the pool and plopped down.

Lightweight, yet room for gels, money and your keys.

His family just missed him at the finish line

It turns out that his family was at the finish line, but they could not find Jim among the 26,000 other race participants. So, they also made their way back to the condo. His wife was still out looking for him. His girls were inside the condo room watching TV, waiting for him to show up. All the while, Jim sat suffering and seemingly paralyzed by the pool.

Jim ran the 2012 Honolulu Marathon with his 2 daughters

In 2012, Jim was back in Honolulu to run the same marathon again. Jim offered, again, to pay for his family’s trip to Hawaii. But this time there was a catch. This time, Jim would only pay for the trip, if his two girls would run it with him. His girls were now grown adults in their 20’s. They agreed and started training.

The training plans fizzled out as the months went by. But they did end up running the 26.2 miles in the Honolulu Marathon that year. They did walk a lot and finished in just under 10 hours. There was no time cut off for this race. While Jim danced across the finish line, his girls dragged themselves across. They discovered a newfound respect for their father after completing the course.

Ad: Advanced Blister Kit by BlisterPod that every Marathoner needs.

In 2016, Jim offered the free trip to Hawaii again. It was the same deal; he would pay if they ran it with him. They declined. However his oldest daughter did decided to go to Hawaii with Jim and his wife. Rather than have to run another marathon, she elected to buy her own airplane ticket. This time there were no issues at the finish line. They cheered Jim on as he finished his 100th marathon.

Jim tells of his favorite marathons

Jim’s dream was a race of his own

It was during one of his marathons that Jim dreamed up the idea to plan his own race. After running well over 200 races, he knew a thing or two about what runners want. Thus, the idea of the Kakabeka Falls Legion Half Marathon was born.

Jim had the idea of running from the Kakabeka Falls Legion, where he is a member, for a while. But in order to do this, runners would need to run a short section of the Trans Canada Highway. Never in a million years did Jim think that the Ontario Provincial Police (OPP) and the Ministry of Transport of Ontario (MTO) would allow him to close a section of this major highway.

Ad: The High Performance Planner and Journal for event planning and increasing productivity

Jim worked on building his race

He worked with the OPP and MTO and was able to obtain a permit to close the highway for 20 minutes at the start of the race. It was just enough time to clear the starting mass of runners off this section of highway. Jim was pleasantly surprised at how cooperative and smoothly this process was. The race could happen now.

Unable to find any seed money to fund his race. Jim decided to fund the start up costs himself. As the planning progressed and word got out, Jim was able to obtain some race sponsors later, after some serious leg work.

Jim’s dream of hosting the only premier half marathon road race in North Western Ontario was becoming reality. When he mapped out the distance of this looped course, it was exactly 13.11 miles. He knew this was a good sign.

The Kakabeka Falls Legion Half Marathon race course has it all

The course starts at the Kakabeka Falls Legion, follows the Trans Canada Highway for a short distance before turning off onto secondary Highway 588. The route then follows along the scenic back road of Harstone to reach the hills of Luckens Road. Many a runner are scared and intimidated by these hills.

This section on Luckens Road starts with about a 1-mile steady climb followed by several tall rolling hills. It is challenging to run these hills, but complete fun when you reach the top.

After the hills, the route enters the Kakabeka Falls Provincial Park and winds along the Poplar Point trail for about 3.8 km, exiting via the campground.

After exiting the trail, the half marathoners run down hill to the beautiful Kakabeka Falls. Here a professional photographer awaits to take your photo.

Then it is off to the finish through the town of Kakabeka where residents and spectators gather to cheer the runners on. Finally, there is a slight climb to the Trans Canada Highway and back to the Legion for post race festivities.

This course has it all; road, challenging hills, boreal forest trails, bridges, a scenic waterfall and gorgeous scenery.

Best race course on the planet

One mile from the finish, Jim has arranged for several volunteer runners to greet half marathoners and help them reach the finish line, if needed. He calls these helpful and friendly volunteers his Last Mile Crew. The idea was born when Jim helped several struggling runners to the finish in a few of his marathons, and saw how well this concept worked in Ottawa.

Each year, Jim adds to his race to make it even better. His experience as a runner has helped him develop a high-class race event. I can’t wait to see what Jim comes up with next. Perhaps there may even be barley water at one of the aid stations one year for us to try.

If you enjoyed this story, be sure to check out Pink Ribbon Runner’s other Runderful People and Races & Places. 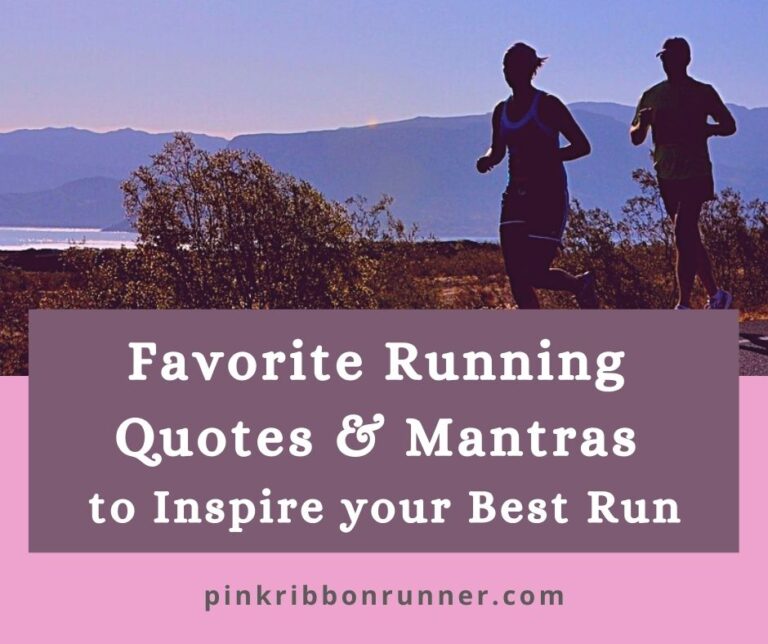 This post contains affiliate links. As an Amazon Associate, I earn from qualifying purchases. Running can sometimes be a struggle, especially when you are tired and sore towards the end of a long run or race. It is during these hard times that many runners fall back on their favorite quotes and mantras to push…

The Friday before the 2019 Boston Marathon, Trevor Zimak received an email from the Boston Athletic Association (BAA). He was invited to start with the Boston Marathon Elite Men. He qualified with a time of 2:20:04 at the Grandmas Marathon, which put him in the first corral of wave one. But, as luck would have…

On May 20, 2019, I ran the Fire Fighters 10 Mile Road Race in Thunder Bay, Ontario, along with my marathon training buddies, my husband and a whole bunch of friends. It was the perfect day to run a legendary race. Three of us young-at-heart women are training for our first marathon in October this…