Anita wants to run a marathon.  She is a busy woman, working 50 – 60 hours per week managing a local grocery store and taking care of her family.  While her children are now adults, Anita is far from an empty nester.  She spends as much time with her two daughters as she can.

But Anita’s hopes to run a marathon in 2019 with her friends seemed to be slipping away from her grasp.  She was plagued by illness for most of 2018.  Her stress-filled life was slowly eating away at her health.  Until one day she simply decided she wasn’t going to be sick anymore.  And, after that day, she hasn’t even had one bout of flu or cold.  She is now making a rapid comeback and training for her first marathon.

This is her story

Anita first started running again 6 years ago.  She loved running, cycling and yoga as a teen.  But with young children to raise and working full time, Anita found little time to do things for herself.

Then she found herself overwhelmed by a sudden crisis in her life.  The stress of the situation quickly built up and took a tremendous toll on her health and well-being.  She was not feeling like herself; so full of negative thoughts and emotions.  Needing to do something to put herself into a positive place, she drifted back to the things she loved as a teenager.

She signed up for a learn-to-run class that started in June.  In May of that year, she started walking.  She didn’t want to be the slowest in the clinic and was determined to get herself back on track.  She walked as fast as she could using lampposts to determine her progress.  Walking at the fastest pace she could muster, she walked from lamppost to lamppost. The next day, she would try to add on one more lamppost.

Running became peaceful time to herself


Eventually, she found a route from home that circled through a coffee shop where she would pick up a coffee to continue.  It became her early morning routine and treat to herself.  It was quiet and peaceful at that time of the day.  She loved her precious “Me Time” as her family continued to sleep.  She continued to build up slowly with walking faster and further, then slowly adding running into this 4 km route.

She was able to relax during her time alone, enjoying the fresh air, nature and sounds of the birds. She was able to focus on herself.  It was a lovely way to start her morning.

With the support of friends, she took her running up a notch

When the beginner running class started in June, she met 5 other ladies there.  They easily became friends, as runners often do.  They progressed onto a 5 km running class and eventually a half marathon clinic together.

It was during these classes and various group runs, that Anita found herself loving the social aspect of running.  Her running buddies were a great source of support, not just for running and leading an active life, but for emotional support as well.

Anita ran her first half marathon

When her friends decided to run their first half marathon, Anita was fully on board.  It sounded like a fun challenge.  In 2016, Anita and 5 of her friends trained and ran in the Garry Bjorklund Half Marathon in Duluth, Minnesota.

One of her friends, Lori, had made a pact with her to cross the finish line together.  It wasn’t easy. That year that Grandmas Marathon, of which this half marathon is a part of, was black-flagged.  The temperatures and humidity were dangerously high that year, putting the runners at risk although the race continued.  But that didn’t matter to Anita and Lori.  They were on a mission to get to the finish line and have fun doing it.  Time did not matter to them.  It was the memorable moments that mattered.

The race was a party from start to finish

Anita describes her first half marathon experience as a party from start to finish.  It was fantastic and exhilarating, especially having ran this race with Lori.

Lori was having some issues with sore feet and the two ladies had to slow down in the last 5 km.  But Anita didn’t care, she was having fun.  This was the best part of the race.  The residents of Duluth came out and offered the runners beer, bacon, watermelon and even Advil.  The cheers and hoots from the massive crowds that gathered motivated the runners to keep going.  It was amazing.  The two ladies ran through the sprinklers to cool off.

They finished in just under 3 hours.  Anita was ecstatic.  In her mind, she had a goal, loosely set, for 3 hours.  Despite the heat and Lori’s feet, they were under that time.

To soothe tired and sore feet after a run

They had so much fun, they ran it again

Anita had so much fun that year, she decided to do it again.  The same group of women ran the same half marathon the next year.  This time Anita ran with Stephanie, friends since high school.  They were running well that year.  They decided to up the ante and set a goal time for 2:30. Unplanned, Stephanie and Anita alternated between feeling weak and feeling strong.  Each became the others coach and cheer team as they approached the last few miles. They pushed hard to the finish to achieve their goal time of 2:30:15.

Then it was time for something new

The next year, Anita decided to try a new half marathon and ran her third in Sault Ste Marie, MI at the International Festival of Races.  Her friend, Tricia, had raved about this little gem of a race and took a group down with her in 2018 to run it again. Anita was excited to run it, although stress and illness prevented her from training for it.

In January 2018, Anita had a bad cold and wound up with bronchitis.  She was on inhalers, antibiotics and prednisone.  She was quite ill from this.  It took months to recover. During this period of recovery, she was hit again with cold and flu viruses.

In the Spring of 2018, Anita was finally able to run again.  She started to train for a half marathon.  But that glorious freedom to run was short lived, as she developed shin splints from the newly increased active lifestyle.

Where there is will, there is a way

She had treatments done for shin splints and after a period of rest, she was able to run again.  She started building back with pool running, cycling and yoga, followed by short runs at slower paces. All this cross training combined with the little bit of running she was able to do, saw her to the finish line of her third half marathon.

Great for shin splints and other common injury areas

The dream of a full marathon

There was talk of running a full marathon in the fall of 2019.  Anita wanted to do this with her buddies. Stephanie and Anita talked about it several times on various runs.  Running a marathon seemed like a challenge that they both wanted to try.

Anita’s running was getting better.  She was gaining momentum.  Then she was hit again with illness.  She developed shingles that December.  Her hopes to run a marathon seemed to be slipping away.

Anita was sick of being sick

After recovering from shingles, Anita and her family went on a vacation to Mexico.  It was here that Anita was able to relax and recharge. After recounting her illnesses of 2018, she decided she wasn’t’ going to be sick anymore.  That was it. She had had enough.

Anita changed her mindset to a positive one.  She was no longer going to let her stresses in life take over.  She refused to be ill.  Anita started running again. She continued with cycling and yoga.  And she continued to eat well and make healthy food choices.

Since deciding not to be sick, Anita hasn’t been ill.  Her family members have brought home cold and flu viruses during the winter and spring of 2019.  But Anita has not been sick once this year.

Anita signed up to run a marathon

She has now signed up to run a marathon.  She is committed and determined to see this through. Her training is going very well so far.  You can follow along with her progress in the 2019 Marathon Challenge Series here at Pink Ribbon Runner.

Life is too short not to do what you want to do.  Don’t be afraid of going outside of your comfort zone.  Listen to your body and let it train.  Your body can do amazing things if you try.  No regrets. 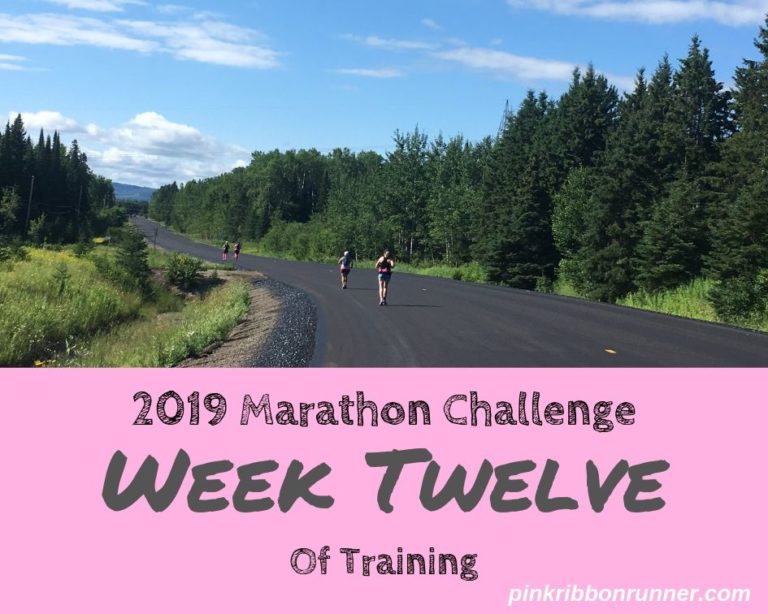 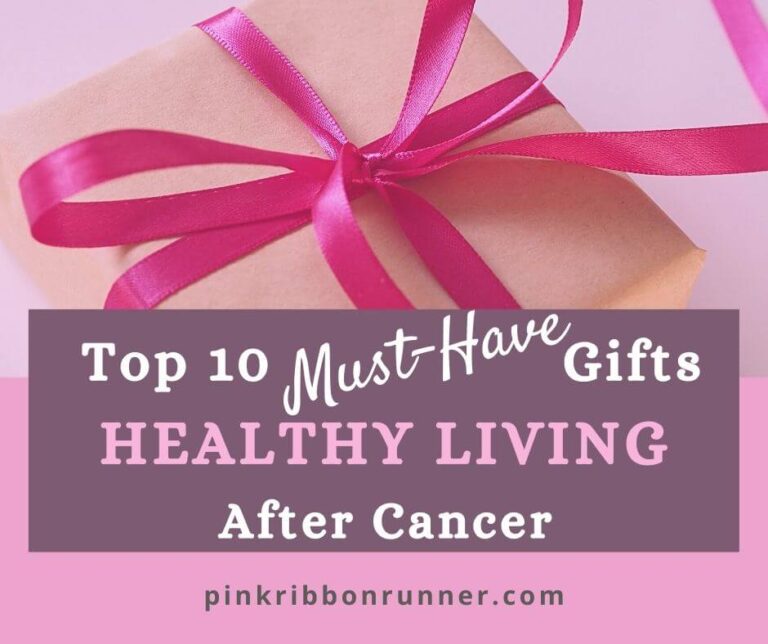 This post contains affiliate links. As an Amazon Associate, I earn from qualifying purchases. If someone in your life wants to live a healthier life after cancer treatments, then this gift guide can help you find the perfect gift.  Finding a special, meaningful present can be difficult, but these ideas might inspire you. I have…

May 14, 2019 is the end of week two of our 2019 Marathon Challenge Training. Anita, Stephanie and I, Tricia, are all training for our first marathon in October. The training is just getting under way. I will be blogging about all our blood, sweat and tears in this journey. I hope you enjoy our…

This post contains affiliate links. As an Amazon Associate, I earn from qualifying purchases. Winter is a great time to run. Sadly, many runners move inside to exercise during the colder and snowy months. But running outside all winter long can be a fantastic way to train for spring and stay healthy. Here are 9…

The Friday before the 2019 Boston Marathon, Trevor Zimak received an email from the Boston Athletic Association (BAA). He was invited to start with the Boston Marathon Elite Men. He qualified with a time of 2:20:04 at the Grandmas Marathon, which put him in the first corral of wave one. But, as luck would have…

This post contains affiliate links. As an Amazon Associate, I earn from qualifying purchases. It is hard to believe that there are only 9 weeks left to race day.  Stephanie, Anita and Tricia (that’s me) are now up into the high numbers for long run mileage.  We are now running at least a half marathon…